While no mechanical changes have been made to the RC200 for the 2017 version, it does get fresh new graphics along with a few other small changes. The bike continues to be powered by the 199.5 cc liquid-cooled engine which is good for 24.6 bhp and 19 Nm of torque. 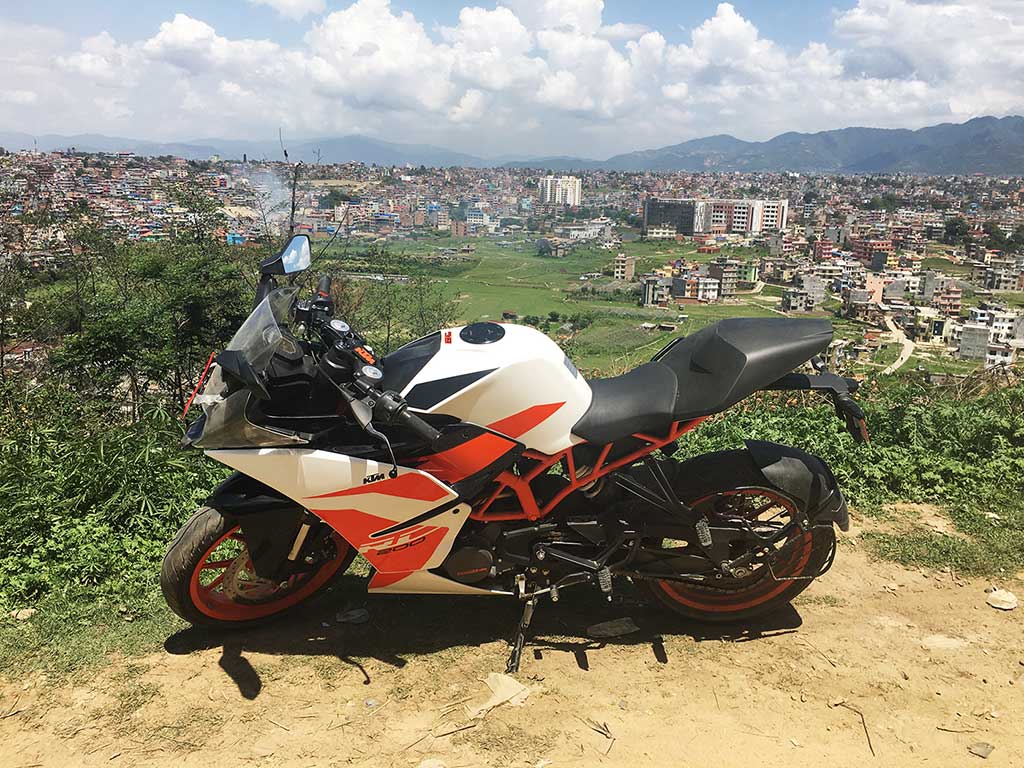 KTM RC 200 comes with all of the premium equipment like USD forks, projectors headlights, aerodynamic design and all-new White-Orange theme. It lacks ABS while shares the Orange frame with its elder sibling, RC390. KTM RC200 competes against Bajaj Pulsar RS200 and Honda CBR250R in Nepal.

Few things that were changed in RC 200 2017:
– The mirrors are now wider and offers improved visibility.
– Like the 2017 RC 390, the new RC 200 does not get adjustable levers and a side mounted exhaust.
– The seat padding is 12mm thick which means more comfort for the rider and pillion.
– Engine is Euro 4 compliant which means more eco-friendly.

Now, I have ridden this bike for about a week now and i am still in early phase to give this review however, according to my a week of riding and judging from all the comments that i had read before i bought RC 200, i have some things that i felt that needs to be cleared.

Also, i mostly will be using this bike for commuting and joy ride during weekends. So, in this post i will explain only on four points which i think these points are very crucial to the buyers trying to buy the new RC 200 because all other reviews does not seem to point the same direction.

Rider seat is not as hard as people say/describe because coming from gixxer. It feels similar for me. Might be a bit hard but it does not feel such. So, people having second thoughts about the seat. I assure you that you wont disagree as well. Well, i have ridden this bike continuously for about 2 hours straight with a pillion and the only thing i felt pain is at my wrist. The seat is very comfortable compared to gixxer. I have not had any butt pains till now.

Again, the suspensions are not that stiff as people say/describe it is. I do not know why the suspension is said to be stiff. Again coming from gixxer i found that the suspension in RC200 is very good compared to gixxer. Might be that my old gixxer had problems as well but this is what i found and i prefer RC200 suspension over gixxer’s suspension.

Comparing to roads. I live in place where there are many potholes. So, if you have such kinds of roads and i am saying that you won’t have problems. You definitely won’t. Well, if you can adjust with point 3 then you might have some problem but not that much of a concern.

Well, i think this is unavoidable for riders without experience in such kind of bikes. Well, i obviously did not have any sort of experience with super sport type of bikes before so obviously i had wrist pains during first initial 2 days of riding but the more i rode it the pain started to go away. Well, the main point is until you get familiar with the bike seating posture you might feel the pain. You’ll get used to it sooner or later.

4. Last but not the Least: Back Pains

Let me be clear to you that i have not had any back pains till now. The only pain i had was on my wrists. So, this also is related to bike sitting position. So, know your bike and sitting position and you’ll be all good.

Now, I suggest you to buy this bike even if you are trying to commute however, you will face certain issues adjusting with bike first but if you have already thought about getting one of these then you will eventually adapt to it fast. Life is a lesson. Gotta try everything before time runs out.. If not then why stick around checking out RC 200 if you are not willing to take the challenge ? 🙂

Do you want bike specs ? Searc for KTM Rc 200 specifications in Google. You ain’t gonna find it here. 🙂

For the Latest Tech News.

In a world without walls and fences, who needs windows and gates ? No gates, no windows bt apache inside! #dev Love for #Unix #Linux #Apple. Interests in coding, music, creative design, Linux and Apple products.

This site uses Akismet to reduce spam. Learn how your comment data is processed.