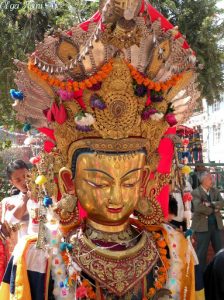 Itilhane Samyak Mahādāna Festival is one of the oldest festivals in Nepal that is held once every four years – five years. This festival is also known as Dipankar Parva, During the time of this ceremony hundreds and more statues of dipankar Buddha are worshiped….

Literally, the term Samyak  means the unity of all sentient beings. There is the mention of three types of Bodhijnāna in Buddhist Tradition – Śrāvaka Bodhi, Pratyeka Bodhi, and Samyak Bodhi. Among these Samyak Bodhi represents absoluteness and Bodhi (Sanskrit: बोधि; and Pali) characterizes the supreme knowledge. In Buddhism it is the understanding possessed by Buddha regarding the true nature of things(Dharma). It is traditionally translated into English with the word enlightenment, although its literal meaning is closer to “awakening.” The verbal root “budh” means to awaken.

Samyak is one of most spectacular festival in newar tradition. It brings across wide-spread newar people together to celebrate being one. That can include any people with any occupation or races. The Samyak Festival is a path of a Bodhisattva that leads towards the attainment of Samyak Sambodhi.

The descendant  of King Bhaskar Devi Barma; the creator of Hiranāya barna Mahabihar named Bhali bharo was very poor financially. He worked as a minor person. Gathering Gobar ( Cow dung also known cow pats commonly used for many purpose during ancient times ) was his profession. Due to shame of his work he even hide the fact to his own wife about his work. Holding such shame and disgrace upon himself, his condition to not being able to do anything. 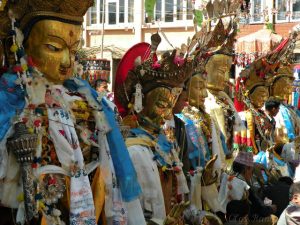 One day Bhali bharo forgot to hide the key to the Storage where he used to store all the gobar, his wife found the key lying on the ground. So, she tried to see what lies behind the storage room which she had not seen. She could not believe what she saw when she opened the room, She found that the room was filled with Gold. In the meantime, husband was off to take bath in the Holy Bagmati river and when he returned his wife explained on how she found gold in their storage room. She quoted her husband that “Even having this much gold why are we Living in Suffering?” Hearing the words of his wife Bhali bharo was amused. So, he went to confirm himself what his wife was saying and found that the Gobar he stored was all converted to Gold somehow.

Then seeing this Bhali bharo said “My Dear Wife ! Due to Blessings from the Triple Gems (Tri-Ratna) we have achieved this much wealth, due to our own Karma or Deeds we had to indulge all the sufferings. From having good faith in Buddha today we got to be the master of this much wealth….So, it is our duty from today onwards and for eternity that we contribute ourselves towards well being of others, and keep faith in Dharma…”.

Being said they contributed to different Images of Dipankar Buddha, followers of buddhist teachings Upāsaka (masculine) or Upāsikā (feminine), Shrines, Monks, Bajracharya and Shakya People and more. Following this tradition the Samyak Mahādāna was genuinely born from that day and celebrated to this day. According to history, it started from 700 years ago. Till 1761 the event took place every year. Due to different unseen scenario later from the year 1761 the event took place every once in four years – five years.

Basically, This festival is observed as festival of offerings ( Dāna ) to Dipankara Buddha, Avalokiteśvara, Vasundhara, Arya Tara, along with the Bajracharya and Shakya Monks as per the Newar Tradition.

On the first day, large images of Dipankar Buddha are brought out of sacred courtyards and private homes and displayed at Durbar Square in a row to receive offerings from devotees and the images are brought to Nagbahal later. Where they will be kept overnight.

On the second day, the status/ images are offered different kinds of offerings by the devotees. The status are kept there whole day in Nagbahal and then in the Evening the Images return towards their sacred courtyards and private homes after all the offerings and rituals have been completed.

Video on Dha: Baja Performance in the Event

The points above may vary due to misunderstanding and translation in-correction. The above history is based on my research and based on the written description in the brochure provided during the event. The information provided above might not be cent percent accurate but they meet the base.

Lastly, I do not own some photos that have words on them. They are randomly picked from the Web. The history section was translated from the brochure so, the terms may vary. Cheers  !!

In a world without walls and fences, who needs windows and gates ? No gates, no windows bt apache inside! #dev Love for #Unix #Linux #Apple. Interests in coding, music, creative design, Linux and Apple products.

This site uses Akismet to reduce spam. Learn how your comment data is processed.